It often begins with a tendency to blush or flush more easily and can lead to more severe cases like extreme redness followed by cystic acne breakouts and sores.

NB: What if I told you I can show you how to never have acne again? If you have acne and want it gone, read this message.

What is Acne Rosacea (& How Do You Treat It)?

Rosacea is a chronic hypersensitivity of the face which is a relatively common skin condition.

This condition usually appears in middle age (30-50) and it often runs in families. It is more common in women than in men and it usually affects people with fair skin and light eyes.

The exact cause for rosacea is unknown and it is still being studied. Still, it is assumed that there may be a combination of bacteria and skin mites aggravated by an inflammatory response.

It is characterized by excessive oiliness, broken blood vessels, redness which sometimes takes on a butterfly shape across the cheeks and nose, solid papules and pustules, stinging/burning of the skin, and sometimes eye area.

The Different Types of Acne Rosacea 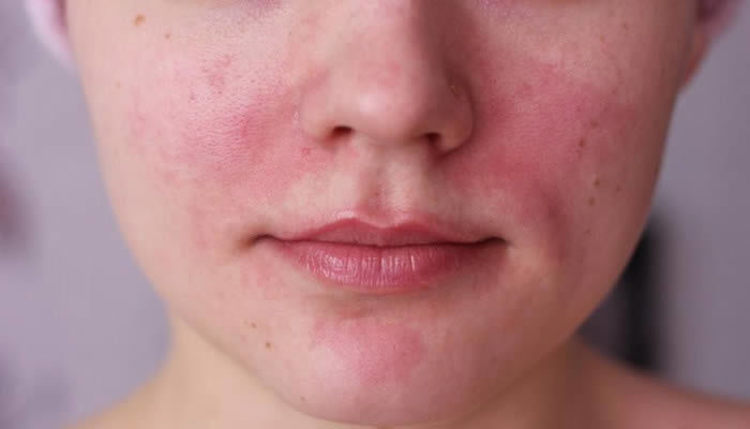 Rosacea can cause more than redness and that uncomfortable stinging or burning sensation on the skin. There are many signs and symptoms that the condition itself has four subtypes which are:

Erythematotelangiectatic rosacea is a subtype one and it is characterized by flushing and persistent central facial redness, dry or sensitive skin, rough and scaly areas, and broken blood vessels.

Papulopustular rosacea is the subtype two of rosacea and it is characterized by blushing and swelling, extreme redness, and oily skin followed by cystic acne breakouts.

Phymatous rosacea is the third subtype of rosacea. It is a condition defined by skin thickening and irregular surface nodules on the nose, chin, forehead, ears, or even the eyelids.

Some people with rosacea also suffer from Ocular rosacea, causing red, swollen, and sore eyelids. In more severe cases these symptoms are accompanied by diminished vision, bloodshot and watery eyes, cysts, and eyelashes falling off.

5 Things That Can Cause Acne Rosacea

Rosacea is a condition that can easily be triggered by eating certain foods, extremes of temperature and general lifestyle. Although not necessarily  causes, these are some of the things that this condition is aggravated by:

It can worsen rosacea in some adults due to the chemical capsaicin used to give “heat” to these foods. Besides spicy foods, there are also foods that cause chronic inflammation in the body, such as sugary and processed foods.

According to clinical research, up to half of the adults with rosacea reported that drinking alcohol worsened their symptoms.

Even a small amount of alcohol can trigger symptoms such as flushing and redness as alcohol dilates blood vessels and promotes heat and redness.

Avoid wine, hard liquor, and most alcoholic beverages, including beer.

A cold wind or a winter chill, as well as extreme heat, can trigger the condition and promote redness on the skin.

Some studies suggest that adults with rosacea have a higher susceptibility to gastrointestinal disease. One particular study reported improvement in rosacea following treatment of small intestinal bacterial overgrowth with medicine.

Stress manifests as an emotion, and it has been proven to trigger rosacea flare-ups just as easily as the above-mentioned physical triggers.

By reducing or completely avoiding exposure to these irritants and triggers, you have a greater chance to naturally relieve the obnoxious and uncomfortable symptoms of this common skin condition.

How to Control Rosacea Symptoms?

Rosacea is a condition that cannot be cured, but there are steps and measures you can take to control the symptoms.

Make sure to take care of your skin using gentle cleansers and oil-free, water-based skincare products.

Avoid scrubs and overstimulating your face while cleansing or applying skincare products. Handle your delicate skin with great care.

These harmful ingredients will irritate and aggravate your symptoms.

A gel from the inner leaf of the aloe vera plant is emollient and moisturizing. It can be successful as a topical remedy for rosacea. Never apply aloe vera on larger areas if you haven’t done a patch test previously.

Due to its anti-inflammatory properties, this soothing ingredient can calm and reduce the redness of rosacea.

Some researches suggest that cannabinoids can positively relieve redness often resulting in anti-inflammatory, antioxidant, sebostatic, and even antitumoral behavior.

Known for strengthening broken and damaged blood vessels by acting like a mild astringent to clean up and reduce redness.

Particularly helpful for fighting acne and rosacea, this hydrating B3 vitamin has a strong anti-inflammatory effect on the skin in addition to its importance in maintaining the barrier function of our skin.

It is the number one acne-buster ingredient.

This is a good choice for delicate skin with rosacea, as it typically doesn’t contain potentially irritating ingredients. There are also formulas specifically formulated to color-correct redness.

this is an anti-inflammatory and antiseptic ingredient that is commonly used to treat oily skin and acne breakouts. It can be used directly on the affected area to get rid of rosacea naturally.

Use Plenty of Sunscreen:

As sun exposure is known to aggravate conditions like rosacea, and it is a main trigger of flare-ups.

Rosacea is a common condition that affects everyone differently. Although there isn’t a cure for rosacea, this skin condition is easily controllable and medically manageable.

The best way to prevent a breakout is to consult with your doctor in developing a treatment plan and avoid your triggers.