CeraVe’s Daily Moisturizing Lotion and La Roche Posay’s Cicaplast Baume B5 are moisturizers that blew up on platforms such as TikTok due to being recommended by many skincare influencers and professionals in the industry.

Both moisturizers are packed with excellent ingredients; however, they won’t necessarily work for all skins and skin conditions.

And since acne is definitely a skin condition that requires a lot of care and attention on what’s being applied to the skin, there might be some potential side effects such as flare-ups if the wrong product is used.

Therefore, having used them both on my oily and acne-prone skin, in this review, I will discuss the CeraVe Daily Moisturizing Lotion vs. La Roche Posay Cicaplast Baume B5 and decide which one is better for acne.

And without any further ado, let’s jump right into it:

CeraVe Moisturizer vs. La Roche Posay Cicaplast: Which One Is Better For Acne?

Judging by the ingredients of both moisturizers, La Roche Posay’s Cicaplast Baume B5 is a better option for acne.

CeraVe’s Daily Moisturizing Lotion is a better option for someone with dry or oily (but not necessarily acne-prone skin) because it contains ingredients such as ceramides, hyaluronic acid, as well as fatty components such as Cetyl and Cetearyl alcohol that work to nourish and moisturize the skin and strengthen the skin barrier.

On the other hand, La Roche Posay’s Cicaplast Baume B5 is a much better option for inflammatory conditions such as acne because it contains panthenol, propanediol, shea butter, madecassoside, and zinc, which are better for soothing inflammation and repairing irritated skin.

Therefore, since acne is an inflammatory condition, the first thing you want to do when trying to heal it is to apply a product that will soothe active inflammation, which is why the La Roche Posay Cicaplast Baume B5 is a better option. 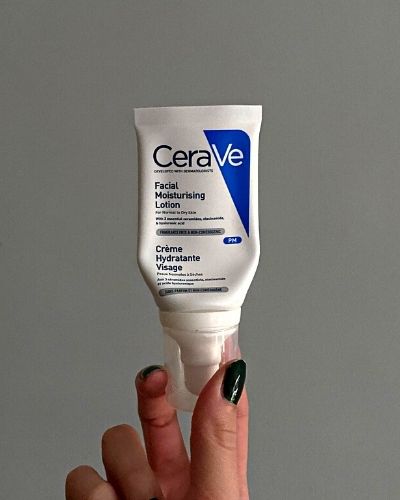 CeraVe Daily Moisturizing Lotion is a lightweight moisturizer formulated with ingredients that work together to strengthen the skin barrier by locking moisture into the upper layers of the epidermis.

After application, the skin is left feeling soft, comfortable, and hydrated for up to 24 hours.

The CeraVe Daily Moisturizing Lotion is formulated with ingredients such as ceramides, hyaluronic acid, niacinamide, as well as fatty components such as Cetyl and Cetearyl alcohol that work to soften the skin and strengthen the skin barrier.

However, the lotion also contains an ingredient called Polyglyceryl-3 Diisostearate, which is a natural emulsifier that brings a soft and powdery feel to the formula.

The ingredient itself is very gentle, and you can often find it in products intended for sensitive and baby skin.

But this ingredient can also become a potential problem for people with acne or acne-prone skin.

Besides being gentle and relatively non-problematic for some, Polyglyceryl-3 Diisostearate is a heavier emollient and can be pore-clogging, which was definitely the case with my skin. 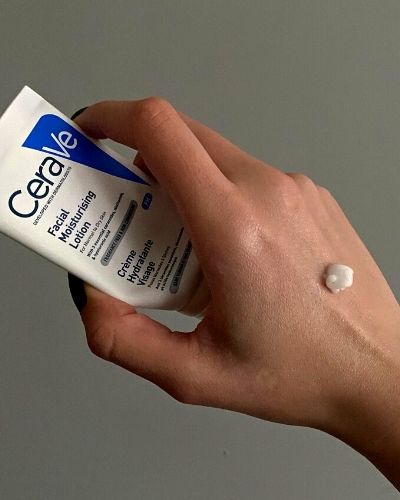 CeraVe’s Daily Moisturizing Lotion has a consistency that could be described as something between a gel and a moisturizer.

It’s fairly lightweight, and it glides on the skin with ease. It’s definitely not heavy; however, once applied to the skin, the moisturizer does leave a somewhat of a glowy layer.

This might not be the case with someone who has dry skin, but as a very oily-skinned person, the shine was prominent on my skin.

RELATED: Paula’s Choice vs. CeraVe: Which is Best for Acne? 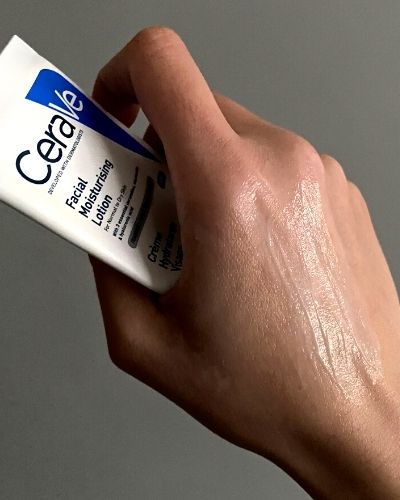 CeraVe’s Daily Moisturizing Lotion worked well on me until it didn’t.

I started using this moisturizer alongside Paula’s Choice CLEAR Anti-Redness Solution with 2% Salicylic Acid, and I enjoyed the lightweight consistency.

However, soon after I started using it, pimples began popping up in areas where I usually break out when my pores are clogged, such as my cheeks, instead of areas where I typically purge, such as my temples and forehead, so I knew this wasn’t a purge but a breakout.

I wasn’t going to give it a chance to continue to break me out; therefore, I stopped it immediately, and the pimples were gone after a few days of my regular skincare routine.

This is also something I’ve read from other users on platforms such as Reddit and Twitter, and since I already knew the moisturizer contains a few potentially clogging ingredients, I never gave it another chance.

On the brighter side, my partner, who has normal to dry skin, ended up loving it and has been using it religiously for around three years at the time of this writing.

So, it’s safe to say that the Daily Moisturizing Lotion isn’t a bad product; however, I would definitely recommend that anyone who has excessively oily and acne-prone skin be careful with it. 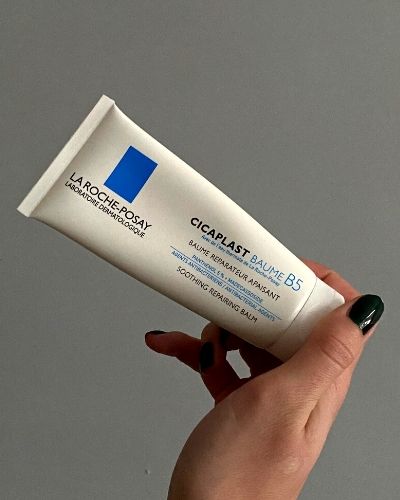 La Roche Posay’s Cicaplast Baume B5 is a multi-purpose soothing cream that can be used on cracked, chapped, dry, and irritated skin to help hydrate and soothe.

It’s suitable for both adults and children and can be used on all areas of the face and body.

This thick balm contains many soothing, repairing, and moisturizing ingredients.

Some of the main ones include softening shea butter, hydrating glycerin, soothing and repairing panthenol, nourishing magnesium, anti-inflammatory zinc, as well as Madecassoside, which is one of the four main compounds in the plant extract Centella Asiatica, an incredibly soothing and repairing agent that helps strengthen the skin barrier.

The Cicaplast Baume B5 is also non-comedogenic, and although it’s quite thick and heavy, there’s nothing here that will clog your pores and cause your skin to break out.

The Cicaplast Baume B5 doesn’t have added fragrance or other fragrant components such as essential oils, and it doesn’t have any scent.

The Cicaplast Baume B5 has the consistency of a thick, creamy balm.

Therefore, it needs to be warmed up between the fingers first before being applied to the skin, as otherwise spreading it around will be difficult since it has a thicker consistency than a regular moisturizer. 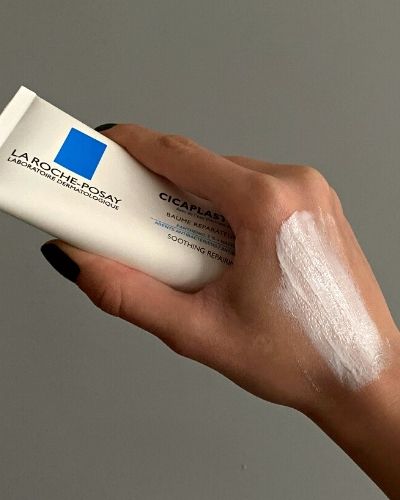 So the first thing I have to say about this product is that the Cicaplast Baume B5 is not a moisturizer, and it shouldn’t be used as such because you will probably hate its consistency and not get the best results from it.

The way I like to use it is by warming it up between my fingertips first and pressing it into the skin in various areas of the face and neck.

Once I have most of the areas covered, I will start rubbing it around very gently to spread the product onto the areas that aren’t covered.

I also like to do a quick lymphatic drainage massage when I don’t use any actives under the balm. This is very important because you don’t want to move your actives around as this will give you uneven coverage.

That said, the Cicaplast Baume B5 does exactly what it says it does, and it’s always pleasant to see a product actually delivering its claims.

I started using the Cicaplast Baume B5 when my skin wasn’t in a great place and was experiencing extreme dehydration, dryness, peeling, and irritation due to starting tretinoin.

I have since stopped using tretinoin because I didn’t have much luck with it, but the Cicaplast Baume B5 was definitely the product that helped eliminate my tretinoin-induced side effects in the beginning.

I used to apply the Cicaplast Baume B5 before bed, 20-30 minutes after applying tretinoin, and I would feel immediate relief from dryness and irritation.

It also helped soothe inflammation, and my purge-induced pimples always looked slightly better in the morning after I’ve used the Cicaplast Baume B5 the previous evening.

I also never stopped using it even after stopping tretinoin, and I even use it as a weekly mask by applying much more than I usually would and sleeping in it.

Kind of like slugging, but instead of Vaseline or Aquaphor, I use the Cicaplast Baume B5, and my skin is the glowiest it’s ever been when I wake up in the morning after masking with this product.

All that said, there’s one claim I disagree with, and that is Cicaplast Baume B5 not being greasy, according to La Roche Posay’s website.

Yes, this isn’t a greasy oil or a petroleum-based product, but it does leave the skin very moisturized and glowy, which is why as someone with oily skin, I only use it in the evenings to avoid shine during the day.

This claim isn’t necessarily incorrect; however, I know that folks with oily skin expect a velvety or a slightly matte finish when we read a product is “non-greasy,” and this one definitely leaves a glowy layer on the skin.